The scene is set at the ‘Ginger Beer Hole’ on the ‘Old Course’ at St Andrews during the October meeting. The match was between Sir David Baird of Newbyth, Bart and Sir Ralph Anstruther of Balcaskie, Bart against Major Hugh Lyon Playfair of St. Andrews and John Campbell, Esq. of Glensaddel . The picture was painted in 1847 by Charles Lees (1800 – 1880) and the original oil painting is now owned by the Royal Portrait Gallery in Edinburgh. The artist was able to paint true likeness of the players and the people who were actually there and a key survives naming them all. The full sized pictures are faithfully reproduced from the original 1850 Charles Wagstaff of London engraving.

A typical scene of the period during the 1840’s, when gentlemen and their lady escorts would descend on St Andrews in large numbers for the Autumn meeting. Great banquets were held with sumptuous food and where the men (mostly) were known to drink copious amounts of excellent wine and port. Golf was also the order of the day and important competitions were played for, in which reputations were often at stake and of course the gambling, where large sums of money changed hands. 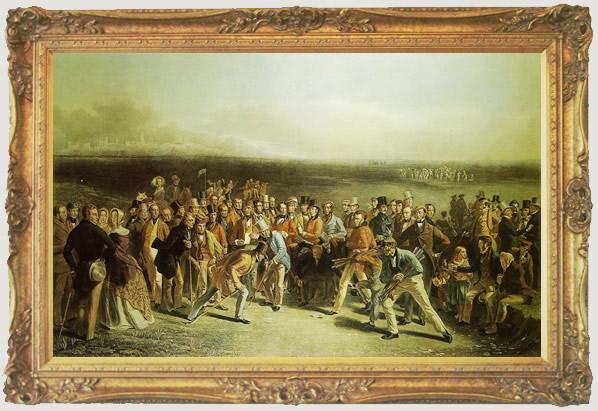